The main office and the workshops where located in Vienna’s 12th district in the Aichholzgasse 52. The flight operations started in 1955 on the “Donauwiesen” airfield which was located at Danube’s former flodd plain close to Langenzersdorf. Langenzersdorf (LOAE) remained our main location till it’s closing due to the construction of the “New Danube” in 1973. Starting in 1968 we departed also from Wiener Neustadt Ost and since 1978 the airfield Wiener Neustadt West (LOXN) is our home base. 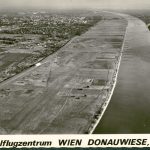 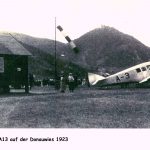 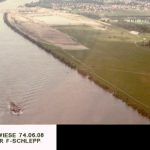 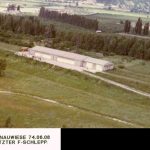 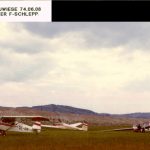 In 1978 also the relocation of all workshops to Wiener Neustadt West took place and the club’s office moved to Vienna’s 5th district at Hauslabgasse 24a which is our official location till today.

This is the report from our honorary member Robert Fiala about  the last glider towing from Donauwiese on 8th of July in 1974:
“In the early afternoon four club members arrived with the towing aircraft Piper PA18 (OE-AIN) and the motor glider SF25C at Donauswiese to transfer the Blanik (OE-0793) to Wiener Neustadt. For the last time the Blanik was moved out of the Hangar, got prepared for departure and towed to our new home base, which was only possible by an exceptional permission. This aerotow and the following departure of the motor glider finalized the flight operations at Donauwiese, which began back in the 20’s as a picture at the district museum Floridorf shows.”

After shut down of the airfield Donauwiese, the club significantly participated in establishing the ASKÖ gllider center Wiener Neustadt West by providing major contributions for the extension of today’s “Donauwiesen-Hangar”. As soon as all the infrastructure of the ÖAeC (hangar and housings), the Donauwiesen-hangar and the ASKÖ-hangar were completed, the ASKÖ-glider-center was officially opened in May 1979.

Thanks to great efforts by Josef Kuchling a club house next to our hangar was built, the whole club was reorganized and the base for todays fleet and infrastructure has been established.

Beside these construction projects a mile stone in our club history was the purchasing of the motor glider SF25C (OE-9147) followed by our Super-Dimona OE-9466 which made aerotowing inside our club possible for the first time. In 1980 we trained our first pilot students. 10 years later we purchased a used winch, which was restaurated by club members and become operative in 1991

In 2002 we agreed on collective flight activities together with the ESV Helios at LOXN airfield, which brought huge advantages for both clubs. In 2003 we purchased the first motor aircraft in our club’s history: the Katana DA-20 (OE-CBB). This was the requirement to provide flight training for powered aircrafts, which started in 2004.

This decade is best charaterized by modernization in various aspects. The ongoing renewal of our aircraft fleet should be mentioned in the first place. Since 2010 we replaced older planes with a Discus 2b, two LS4s and a second ASK21 double seater. In 2014 our airfield office has been renovated together with the dormitory, which now shine in new splendor. Besides that, also a “digital transformation” took place. The whole club management is handled paperless in a browser- and app-based cloud solution since 2016.

Together with the highest amount of new club members in our history, we also integrated the FSV Wiener Neusstadt into the club. This merger brought us 15 new members and our third motorized plane, a second Super-Dimona.

The current decade start with the biggest investment from a financial perspective in the history of our club, which is the new glider launch winch. It’s a battery powered electric winch and the first one in the world of it’s kind. It lifts our glider winch operation, which is not less than the backbone of our club activity, to the next level, in respect of ease of operation, safty and release altitudes.